KYN-11T (designer designation S-K) is a highly advanced droid frame prototype created from similar technology that made up the body of the late General Grievous. Initially produced through Baktoid Combat Automata as a prototype heavy assassin droid, the project was mothballed when Emperor Palpatine ordered the dismantling of all Separatist Forces at the end of the Clone Wars. The project was later sold to the highest bidder, and ended up in the hands of Clandes Industrial, a corporation connected with Cestus Cybernetics and its parent company Baktoid Combat Automata.

Soon after, Clandes Industrial obtained an Imperial contract to conduct research into the development of a new class of autonomous combat droid, a move which caught many droid manufacturers by surprise due to the Emperor’s dislike of droid use in any kind of armed force. Clandes Industrial knew it had to make an impact and so hired famed bio-netic scientist and cybernetic specialist Doctor Nycolai Kinesworthy to lead the research project.
Kinesworthy, who had already been developing several side projects, was given autonomous control of the project and an unlimited budget. After several years of research around the galaxy, Kinesworthy decided on the planet Solanus in the Dominus Sector.

Dubbing the project “T-K,” the first of the projects Kinesworthy had planned, a laboratory in the crystal caverns on the planet was soon constructed, and work soon began in earnest with his vast team of scientists.

Solanus was not only chosen due to its isolation, by was chosen by Kinesworthy specifically so that the Doctor could further his own agendas with the funding provided by the empire, whilst still seeming to progress the Empires requirements. Solanus and its “thinking” ocean was the real target of Doctor Kinesworthy’s research, as he desperately wanted to understand the sentience and somehow harness its power. The main project had fallen into disarray, and Clandes Industrial begun to question the Doctors motives. Kinesworthy had become obsessed, and drew further and further away from his colleagues.

After many months the good Doctor had exhausted all attempts to communicate directly with the ocean, and after some prompting by several Imperial officials, he decided to concentrate his efforts on the intricate crystalline structures that appeared and disappeared seemingly randomly all over the planet, using the premises that the structure could have potential to be integrated into the frame of the droid soldier.

Believing that these crystals in some way embodied the sentience of the ocean, Doctor Kinesworthy studied them in depth. He became convinced there was electrochemical like flows within the crystal matrices, although of a rudimentary binary like nature.

After conducting countless tests and experiments without success, Kinesworthy decided to attempt to integrate a piece of a newly formed crystalline structure into the Droid prototype and see if the advanced droid brain could interpret the entities thoughts.

Unknown to the Doctor the Ocean was growing this crystal within the droid’s body to amuse itself. The sentience enabled the merging of the electronic brain with the crystal lattice structure, and thereby brought into being a new sentient entity. Once this happened the droid activated with a purple tinge to its eye sensors. The droid was instantly self-aware, and after accessing its internal memory banks and the vastness of the oceans memories, in particular the tortures that the scientists had endured upon it. The droid’s processor soon overloaded, and it was not long before the droid realised that the facility and its personnel were present on the world for a single purpose – to utilise this unit for great harm against other sentient beings.

With the crystal entity and the advanced droid brain merged as a single awareness, the unit re-designated itself as Kyanite. Initially, although outraged, the droid did not outwardly display its awakening. Instead, Kyanite started planning its escape from this underground lab, and it was not long before an opportunity presented itself when the base was attacked by a group of mercenaries.

As the facility was attacked, the droid turned on its makers, eliminating the threat, and soon after made its way through the base. Kyanite, collected items it felt it required and made its way to an an emergency shuttle launch area. Kyanite climbed into one of the shuttles, and launched itself into orbit and soon after, into the darkness and loneliness of space.

Sometime later, the drifted into a region of space close to the Ackdoon Singularity, a system size black hole. By chance, a young smuggler who had chanced the boundaries of the black hole’s event horizon happened upon the emergency shuttle. Thinking of the ship as nothing more than scrap metal, the smuggler latched onto the pod with the intent of taking it back to Haenat to sell for a profit.

Whilst examining his chance find, the young smuggler located Kyanite, who at this stage had become dormant due to the long stasis it had placed itself in. The smuggler provided the droid with power, which in turned supplied energy to the crystal. Draining half the ship’s power in a matter of minutes, the droid suddenly became active.

Kyanite assessed the smuggler and his level of threat. The smuggler, who identified himself as the human, Zax Wettega, quickly established that he was no threat. Kyanite was blunt and spoke openly of its ordeal. Zax, who felt somewhat sorry for the droid, allowed it to learn what it could from the ship’s computer and offered to take the droid to Haenat where it was welcome to go out and enjoy its freedom.

During its time with the ship’s computer, Kyanite discovered the requirement for some form of transactional credit. Kyanite also learned something of Zax’s plight, realising that the human was alone, and had been taken advantage of more than once. The following morning, Kyanite approached the young smuggler and said, “I require you to employ me in the capacity of bodyguard. You are clearly incapable of defending yourself on this ship alone, and based on current statistics, you’re likelihood of survival is approximately 2477:1”.

Zax showed bewilderment and replied, “Sure. I guess”.

“My designation is KYN-11T. I call myself Kyanite”, replied the droid. “What is the payment for this task?”

Zax laughed more than he had for some time, “Payment? I’m lucky if I get payment for what I do for the Hutts, and you’ll be luckier if they don’t have you trashed. Besides, you’re a droid. You don’t get paid”.

“Tell ya what Ky, stick with me, and I’ll ensure you get whatever it is you need. Just watch my back, and we’ll get along just fine”. 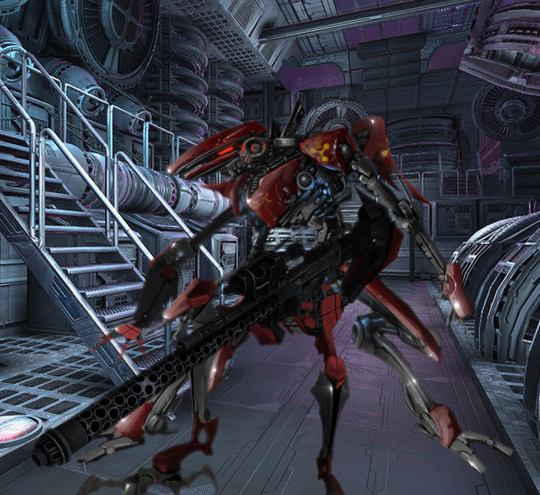