Special Abilities: Changeling: As an action, a Clawdite may suffer 3 strain and make an Average () Resilience check. If the Clawdite succeeds, she changes her appearance to match that of a character she has observed before. Other characters must make an opposed Perception check against the Clawdite’s Deception to detect that something is amiss with the impersonated character’s likeness, mannerisms, or behavior.

Oath [Creed](10)
The Sisterhood of Ananasi: The Ananasi Creed is the code and guiding philosophy of the Ananasi Order, upheld from the first of the order and remains in the modern era. It restricted unnecessary slaughter of innocents, preserved the reputation of oneself and of the Order, and was meant to create peace, not only within the universe, but within the individual. Arargu is a member of this order, a highly respected agent and maintains the creed to the letter of the law, no matter the cost.

Dutybound (5)
‘The Speakers’: A group calling themselves ‘The Speakers’, have partially funded Sisterhood missions for several years since the rise of the Empire. It is not unusual for individual Sister’s to shoulder some of the burden of duty for the Sisterhood, and therefore individual Sisters become duty bound to those organisation the Sisterhood chooses to involve themselves with as a surety of commitment to a group’s cause. In this case, Arargu was tasked to perform duties for the Sisterhood within the organisation of ‘The Speakers’, and as long as their goals continued to match the direction that complied with the Sisterhood’s tenets, then Arargu pledged to continue acting for them. As part of this duty, as they are with any other organisation who seeks their employ, as a Sister of the Ninth Circle, Arargu may be called upon by ‘The Speakers’ to act outside the standard Sisterhood system in order to carry out specific missions. Arargu has been given the blessing of Sisterhood to self-determine if the missions given to her fall within the Sisterhood’s code. If not, Arargu has been given permission to eliminate any threats, terminate her employ, and return to the Sisterhood’s base of operation on Dominus.

Oath
The Sisterhood of Ananasi: Arargu has pledged her life to the Sisterhood and will make every attempt to keep within the tenants of the order. Arargu has attained the rank of Sister of the Ninth Circle, and hopes to rise further in the organisation.

Rargu Nargari was born on Zolan in a segregated slum at the extreme outer edge of the Zolander capital, in the zone with the worst radiation shielding of the city.
Her parents had both died when she was very young and she had been brought up by her aunt and uncle, who already had three children. Life in the ghettos was hard. The lack of food and uncontaminated drinking water, you would think, would lead to violence, but the Zolanders kept strict order over the subjugated Clawdites.

But life was not all bad, as a child Rargu ran with the other children through the streets rom the Zolander enforcers, she would also join in on the attempts to enter the city proper, and was often the last one rounded up. These childhood games Rargu excelled at and little did she know, they set the foundation for her later training. During the political upheavals at the end of the clone wars, with one section of the Clawdite people having put all faith in Count Dooku’s separatist as the saviour’s of the Clawdite species, another faction had been working with the Republic and had hopes that they would free the Clawdites from under the oppression of the Zolanders, Rargu left Zolan as a young girl having been recruited by a strange alien woman who said she could give Rargu’s life meaning and arm her to fight oppression.

Rargu had often thought on how her people could be freed, she had seen how the leaders of her people had failed due to the fractured nature of their existence, bought about by the cruel method that the Zolanders implemented to control the Clawdite populous, the segregation zones. Rargu saw an opportunity to help her people, so she agreed to leave Zolan with the strange woman.

This forged Rargu’s direction and purpose, she gave herself to the order heart and soul.

The Ananasi Creed is the code and guiding philosophy of the Ananasi Order, upheld from Ages past until the modern era. It restricted unnecessary slaughter of innocents, preserved the reputation of oneself and of the Order, and was meant to create peace, not only within the universe, but within the individual.

- Stay your blade from the flesh of an innocent
The goal of the Ananasi was to ensure peace in all things. The Ananasi believed that political assassinations and the death of the corrupt would bring peace and a true sense of security to the common people. Slaying innocents and civilian bystanders who did not need to die could spread strife and discord, in addition to ruining the name of the Ananasi Order itself.

- Hide in plain sight
Be unseen. The Ananasi’ aim was to get close to their target stealthily, and escape just as quickly. In more ancient times, Ananasi aimed to perform ostentatious, awe-inspiring assassinations, usually in public.

- Never compromise the sisterhood
The actions of one must never bring harm to all. If an Ananasi failed in her duty, and was captured or chased, she must never commit any action or say anything that could be tied back to the Sisterhood, or bring harm to any member of it. The Creed’s Maxim: “Nothing is true; everything is permitted”.

Rargu had been visited many worlds on missions for the Sisterhood, those missions were normally instigated by various outside parties, but since the fall of the Republic the sisterhood had been taking on more missions for a group that sought to oppose the new Empire, and with the growing unrest that this new Empire was bringing to the galaxy the Sisterhood had no choice but to align with these Rebel’s, the current rulers were not bringing about peace, but the complete opposite, oppression, fear and death.
Through her years of dedicated service to the sisterhood Rargu has proven herself worthy to attain membership to the ninth circle of the sisterhood, a great achievement for one so young. This is the first rank at which a Sister is allowed to choose her missions from among a list, she is also allowed to put forward missions to the Sisterhood for approval.
These missions must meet the tenets of the Sisterhood in all ways. In the end they must bring peace to the universe and peace to oneself.

At the ninth circle level a sister is given more freedom to travel and is allowed to carry out solo missions, although all the sisters know that the sisterhood watches all. Sanctioned missions are always well prepared; the sister given the mission is supplied with sufficient equipment and information to carry out the mission.

Each mission is carefully aligned with a sister, as each sister is not the same in their skill and abilities, each must grow their own strengths and all must know one method of exacting the sisterhoods will.

For Rargu this strength was stealth, cunning and the long rifle, this pointed the sisterhood to trainer her in infiltration and sniping. Rargu’s life since leaving Zolan has been spent within the confines of the sisterhoods training houses or on missions with her sisters. The Sisterhood training houses are all very peaceful places areas for quiet contemplation and areas for hand to hand combat training.

This last mission to the ocean world was the culmination of years of research by both the sisterhood and the rebels to track down this professor who was responsible for developing the mechanical death machines that caused so much destruction, and who had been granted, under the new regime, licence to re-establish his mechanical experiments again. This individual had been slated for death to help bring peace back to the galaxy.

The planetary drop was standard, the long swim to this crystal outcropping was not. But the gear survived and the quarries location was confirmed to be within the facility 2 clicks from Rargu’s hidden position. The tidal wave was very unexpected, but luckily Rargu had been watching the facility for several days and had the guard timing recorded, when the tidal wave warning sounded it was just as a change of guard was scheduled, seeing the opportunity, Rargu left her hidden position and entered the base just as the shield went down. She quickly located a nice hiding spot and set to wait. 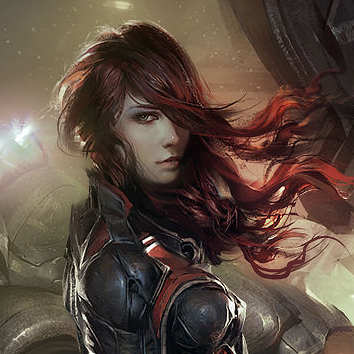