L’zadarma was born is space, and has known nothing other than living amongst the stars. Sure, she’s been from one side of the galaxy to the next, but the one place she has never been, is to her home world of Ryloth – home to her people, the Twi’Leks.

Her family were once well to do merchants – owners of the D’bro Shipping Cooperative, a respectable shipping firm ploughing the space lanes of the Perelmain Trade Route, making a profit, and enjoying everything that space life had to offer. L’zadarma’s family was large, with the family running the entire business. Brothers, sisters, uncles, cousins and grandparents alike, all worked or breathed the business.

L’zadarma learned from a young age that she had a knack for everything mechanical. Her father told her often than from the moment she opened her first toy, he knew she had grease running through her veins. He told her that within hours of that toy hitting the ground, she had rewired it into her PlayPad and what started as a new doll, soon became a servo-droid, capable of cleaning her room – a chore she was more than happy to have the droid complete for her.

As L’zadarma grew up, she would spend hour after hour learning the inner workings of the engines of the massive merchant class carriers, absorbing everything she could from the many mechanics who kept the ships running.

The good life that L’zadarma and her family had always enjoyed was about to come crashing down around them in the form of the Clone Wars. What was once the business of moving supplies from the Mid and Outer Rim Territories to the Core Worlds soon turned into shipping supplies and personnel for the various worlds affected by the war. It became a matter of not whose side they were on, but a matter of whoever had the most credits. Eventually this turned to moving citizens who had been displaced due to conflicts between the Clone Troopers of the Republic and the Battle Droid Armies led then by the mysterious General Grevious.

L’zadarma was 14 when the Clone Wars officially started, but the war started well before then with Count Dooku forming the Confederacy of Independent Systems (CIS). Dooku was a well-known customer to L’zadarma’s family, a fact that was kept well hidden for some time. During the last year of the Clone Wars, as more and more people were displaced from their worlds, business became scarce. The D’bro family had already lost several of their larger ships to pirates, and others had been caught amongst space battles between the Republic and Separatist forces. The war had taken its toll, and the once great merchant fleet of the D’bro Shipping Cooperative had soon become little more than several freighters and two capital class container ships. Luckily, most of the family members had survived most of the conflicts, even if their ships had not. The war however had not been kind to its patriarch, Luc’Isla D’bro, L’zadarma father, who had become ill.

Luc’Isla soon retired to his original family home on Ryloth, and his first born, L’zadarma’s eldest brother Dai’Mar took control of the fleet. Dai’Mar knew, as did many of the family, that the business was about to collapse. Xenophobia was at an all-time high in the Core Worlds, and the newly installed Empire took great pleasure in providing the best contracts to human businesses. The ships which originally had been their havens, had now become hovels, and the credits to keep everything running had become scarce. Ships were bordering on being mothballed, or sold for scrap. Dai’Mar, an acute businessman in his own right, soon instigated a new family tradition – upon a child’s 16th birthday, they would leave the protection of the family business and fend for themselves. The only rule – half of what they earned would be returned to the business.

Dai’Mar’s actions saved the business enough to keep it afloat. The plan had worked, and as the years passed, L’zadarma soon realised that her time was up. After celebrating her birthday, she was shipped off to the Dominus Sector, a place where she had been numerous times before.

It was not long before she obtained work as a mechanic on Haenat. The business she worked for appeared legit, but soon she learned that her boss was a supplier of booster blue to the local dealers. L’zadarma was approached by a young man who claimed to be needing a person of her talents to help on his ship. L’zadarma considered his offer, and the Bounty Hunters that arrived several days later helped her make the decision to take the smuggler up on his offer. L’zadarma has been working for the man ever since. 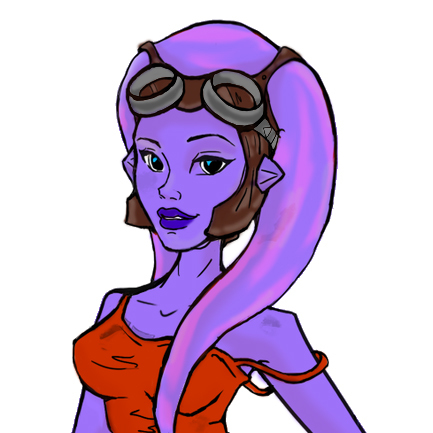